Mockingjay Part 1 - Kind of Review But Not Really 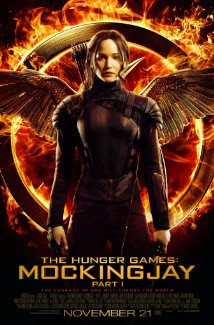 ****Disclaimer: It has been so long since I read Mockingjay. And despite being an avid re-reader, I've only read Mockingjay once. That being said, I am not intimately acquainted with all of the minor details of this book.*****

So yeah, I'm not going to be discussing what was really different between the book and movie because even though I know there were difference (there always are), I don't know the book well enough to point them all out. As a matter of fact, this isn't even going to be much of a review. I just have a few points/comments that I want to make.

When they announced that they were splitting Mockingjay into two movies, I really felt like they were just trying to drag this series out. BUT since seeing the movie, I can totally understand how and why that decision was made. Doing so allowed them to really showcase the emotional state that Katniss is in after having survived two different Hunger Games as well as her emotional state being separated from Peeta. There's no way the character development would have been done justice had the entire book been squeezed into one movie. Plus, there does happen to be a good stopping point that breaks the story into two big pieces.

Jennifer Lawrence's acting was pretty spot on. I've been impressed with her all throughout the past two movies, but I felt like she kicked it up a notch in Mockingjay Part 1. I was actually reminded of Shailene Woodley's performance in both Divergent and The Fault in Our Stars. Do you guys know which scenes I'm talking about? Josh Hutcherson and Liam Hemsworth did really spectacular jobs as well. Although I feel like they made some changes with Gale and Katniss in the movie in order to direct the viewers that haven't read the books in the right emotional direction. I have a feeling this might irk some readers--especially Team Gale fans. (Team PEETA!!!)

I wasn't fully aware what the difference was, but Holly cleared it up for me--the wig they put on Jennifer Lawrence.....yeah, enough said. Also, Julianne Moore's colored contacts were extremely distracting and unnecessary.

And so yeah, not really any huge revelations here, but I honestly really enjoyed it. I feel like I need to do a re-read of the book as well as a rewatch of the movie in order to really absorb everything. But the graphics, the acting, even the changes they made were all pretty well done with no real complaints from me. Mockingjay Part 1 gets 4 Stars from me. Have you see Mockingjay Part 1? What did you think?

Posted by Somewhere Only We Know at 12:09 PM