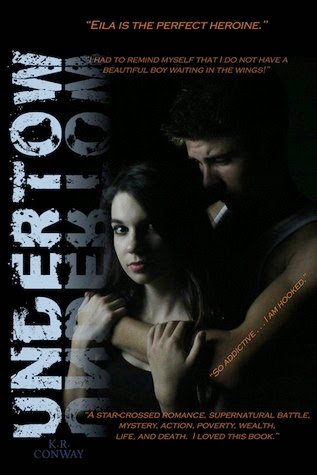 *Note: The above link to Amazon and Book Depository are affiliate links. Affiliate links support giveaways for Somewhere Only We Know readers.

Goodreads description--Luckless Eila is unknowingly the last of her kind: Rare. Gifted. Breakable. Stunning Raef is her kind's historic enemy: Soulless. Lethal. Lost. A legendary death 160 years before would set their lives to collide, forcing a beautiful killer to become a savior, a simple wallflower to become a warrior, and ruthless destiny to become a death sentence.

Seventeen-year-old Eila Walker’s new home has defied the brutal Atlantic for over 160 years. Abandoned since her 4th great grandmother Elizabeth vanished, the town legend declares that she drowned . . . or was struck by lightning.

Unbeknownst to the town and Eila, however, is that someone does know what really happened to Elizabeth, and he has returned, determined to protect the last surviving Walker from a history of violence.

But what starts out as a quest for redemption, evolves into something more and soon young guardian, Raef, is forced to reveal the truth to Eila. As hidden secrets about their warring families come to light, Eila begins to realize that she may be their best shot at survival, even if it means following in her grandmother’s fearless footsteps to save her killer bodyguard.

Undertow has an overall Goodreads rating of 4.14 at the time of writing this review. I’ve seen bloggers say that they enjoyed this book and mostly I’ve seen 4 Stars reviews. So I had one of those feelings like maybe this book was going to end up surprising me, yet at the same time I kept putting it off. Since I was on a cruise, I thought a book titled Undertow might have an appropriately nautical theme, and plus I’ve had this book in my possession and for review for entirely too long. So I picked it up.

I was thoroughly impressed with the beginning of this book. I was moving right along, interested and intrigued, but by the 50% mark things were happening that had me contemplating DNFing. I ended up deciding to finish the book because I’d come so far that I hated to “waste” the 50% progress.

Eila was an okay character. She was more enjoyable in the beginning of the book versus the latter half. Eila’s parents died when she was young and she lives with her mother’s best friend. She receives an odd inheritance in the form of a really big, expensive, and historical house in Cape Cod. Once she moves to Cape Cod she is introduced to a couple of people who become her new friends. She goes to a new school. And well things start falling into place—or out of place, however you want to look at it. This is where things started to go awry for me. Eila immediately gets on the bad side of the cheerleading squad/most popular girl, Nikki, for no good reason at all. And well cliché after cliché hit from here.

So we’ve got the popular mean girl that is described as “queen” of the school with phrases like “holding court” being thrown about. We’ve got the new girl that sees herself as being very plain hooking up with the new boy who gives off “I’m dangerous, but loveable” vibes. Our main female character has gifts/talents/abilities that she doesn’t have a clue even exists, yet, she’s supposed to be super, mega powerful. And well loveable-bad-boy just happens to be toxic to new girl’s abilities. We’ve got a situation where everyone around the main girl knows the big secret, but getting them to share the lowdown with her is like pulling teeth. And it just so happens that all of the new girls friends happen to have a talent of their own. New girl has no idea how to use her talent and has never really tried but just when she needs it most she miraculously does not only what she was trying to do but better. She saves the day. Except, oh crap, she learns how to use her power, the loveable-bad-boy who happens to be toxic for her must now maintain his distance from her for her own protection. Did I miss anything?

More than anything, the further I got into Undertow the more I felt like I’d read this book before…like possibly 100 different ways/variations. It was the exact same story regurgitated with different supernatural beings, different character names, and a different location. I hate to be unfair to Undertow or to KR Conway. This wasn’t an awful book. It wasn’t difficult to read. I just didn’t find any of it to be original. The conflict resolution was too easy. The twists weren’t surprises at all. Overall everything was just average. I’d give Undertow a hesitant 3 Stars. Have you read Undertow? What did you think? Let me know!

Posted by Somewhere Only We Know at 6:02 PM