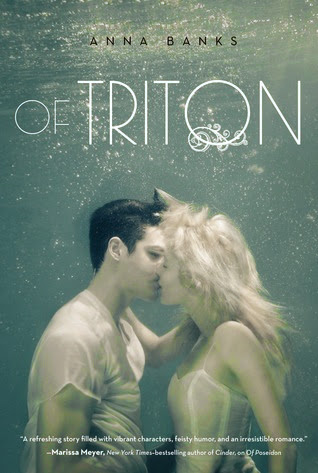 Goodreads description--Emma has just learned that her mother is a long-lost Poseidon princess, and now struggles with an identity crisis: As a Half-Breed, she’s a freak in the human world and an abomination in the Syrena realm below. Syrena law states that all Half-Breeds should be put to death.

As if that’s not bad enough, her mother’s reappearance among the Syrena turns the two kingdoms—Poseidon and Triton—against one another. Which leaves Emma with a decision to make: Should she comply with Galen’s request to keep herself safe and just hope for the best? Or should she risk it all and reveal herself—and her Gift—to save a people she’s never known?

Once again, Anna Banks infuses Emma and Galen's points of view with humor, intrigue, and waves of romance.

Since I got Of Poseidon as a free audio download from Sync last year, I decided to pursue the second book in the series when I saw that my e-library had an audio copy of it also. I like audiobooks for books that I’m interested in, but yet don’t want to devote too much of my available reading time to getting marked off my TBR list. I usually listen to audiobooks while I’m working (if I’m working on something that doesn’t require too much thought) and when I’m doing housework. And so I can multitask. At the same time, I wouldn’t be able to read during work or while doing housework anyway, so this actually allows me to expand my reading time. But I try not to listen to books on audio that I really care about either. I don’t want to miss anything. And so Of Triton was the perfect audiobook for me.

I vaguely enjoyed Of Poseidon, but I felt like had I actually read that book over listened to it I would have found more frustrations and probably not have enjoyed it as much as I did. And I feel the same way about Of Triton. This book had frustrations for me, but because I was listening and not actually reading, I brushed over some of my frustrations. And this wasn’t a book that I felt like I had to absorb every single detail. I also want to note that like Of Posedion both Emma and Galen narrate, but still Rebecca Gibel is the only one to read both parts. I think a male narrator for Galen’s POV would have helped.

I didn’t take notes while listening to Of Triton and now that a couple of days have passed since finishing it, I don’t really remember too much about what happened. I mean I’ve got the big plot points, but the little details are escaping me. I do remember being annoyed with Emma’s mother in the beginning of the book. She made a lot of assumptions, and then I actually remember other characters doing a good bit of assuming as well. That’s always a frustration of mine.

I realize that I’m not giving much detail about Of Triton at all in this review. The characters are essentially the same ones from Of Poseidon. They face some conflict. They find a way around said conflict. There’s a happy ending with a little sad part. And there’s got to be more conflict to come as there’s a final book in the series. Speaking of Of Neptune, I’m not sure if I’ll ever read it or not. After reading the description, I’m not sure I can deal with a potential love triangle so late in the series and on top of the other frustrations I’ve had with this series. So I’m not sure if I’ll read it or not.

Of Triton gets 3 Stars from me. It was “okay.” There wasn’t much wrong, but there wasn’t too much really good either. It was just one of those average books. I’m glad I listened to it on audiobook instead of reading it. Have you read or listened to Of Triton? What did you think? Let me know!