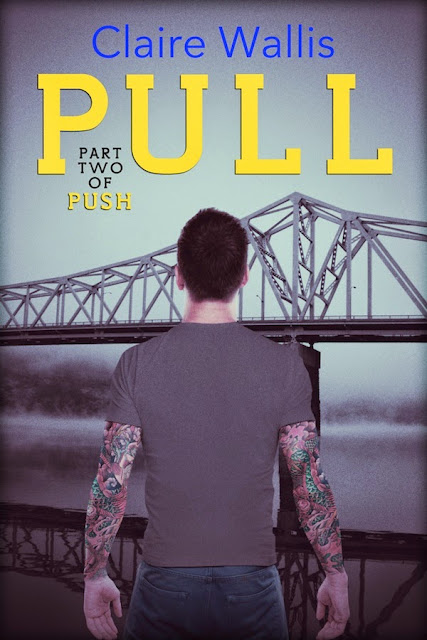 *Note: The above link to Amazon is an affiliate link. Affiliate links support giveaway for Somewhere Only We Know readers.

Description--***PULL is the continuation of Claire Wallis' sharp and shocking debut novel, PUSH. It is the second book in the series and is not intended to be a standalone.***

"It is impossible for someone like me—someone with a sin-list capable of wrapping itself around the world—to find redemption. To be repaired."

David Calgaro has secrets, and the only woman he's ever loved is about to pay the ultimate price to protect them. He's spent a lifetime searching for purpose and control. And the only place he's managed to find them is in a single, perfect moment; a moment in which he has absolute control over someone else's life.

David is unredeemable, unfixable, unsalvageable. But Emma Searfoss has forced a tiny sliver of hope to penetrate his soul. Hope that, even though redemption is impossible, maybe life isn't. Maybe he isn't who he thought he was. Maybe he's meant to be more.

This is a new adult novel with mature content for readers 17 and up.

Pull is a book that I have been EAGERLY awaiting since April of this year. I read Push by Claire Wallis in April and was so happy with the experience. Push was so much more than I expected it to be when I read the description on NetGalley and decided to take a chance and request it. I’m so glad that I did. Those who’ve read Push know what a massive cliffhanger bridge-jumper Claire Wallis left us hanging with. Apparently there’s a whole class of readers that hate cliffhangers, but I’m not one of them. Cliffhangers just make me that much more anxious to continue with a series. And man, I would have been angry had Pull not been written. I still would have thought Push was a good book. So all of that just means I was anxious to get my hands on Pull and find out what happens next to Emma and David.

I wasn’t sure how Emma and David would move forward from that epic end to Push. How can a girl allow herself to be talked into jumping off a bridge, realizing that she’s not the first girl to be put in this exact same situation, continue a relationship with the guy who talked her right off the bridge? How in the world would they move forward? How would David redeem himself? But I really think Claire Wallis handled this brilliantly. Essentially, we get more information at the beginning of Pull that we didn’t have with the end of Push. I didn’t remember all the details of Push that I wish I did. A re-read before starting Pull might have been better for me, but I just couldn’t wait to find out what happens next.

In Push periodically there would be a flashback narrated by one of the girls that David dated, but in Pull we get these events from David’s perspective. We also get some general flashbacks of David’s life since his mother’s suicide. I always kind of sigh when I get to these because jumps in chronology aren’t really my favorite, but Claire Wallis did me a solid in keeping these sections fairly short. I never felt like putting the book down because I knew I would read through those sections fairly quickly. In addition to the flashbacks, we also have a new narrator. Both Emma and David narrate in Pull, like Push, but Matt also narrates. I wasn’t sure in the beginning what that would mean for the story, but Matt offers a unique perspective of at least two crucial events.

I never had a problem connecting to David in Push. I paid particular attention to the wording Claire Wallis used in the flashbacks versus events in the present with Emma, and it was easy to see that things with Emma were different for David. But because Pull exposes David’s thoughts during the past, I found myself understanding him even more. Obviously, I don’t agree with his coping mechanisms. Bad crap happens to people daily, and you can’t go pushing people off bridges to make yourself feel better, but David was a more complex character than I think I even realized while reading Push.

Since I said Pull is a story about redemption and whether it’s possible or not even though Emma was such a large part of this story, Pull is about David. Really the whole series might be. I loved Emma though. She’s so confident in herself, in David, and in their relationship. It’s such a different place than I expected her to be in considering the ending of Push. I loved seeing her step up and take the control that David cherishes so much away from him.

I don’t want to spoil even the slightest bit of this experience for any reader. I highly recommend these two books. But 90% of what I want to talk about revolves around the ending of Pull. Claire Wallis has a thing for endings man. I’m not sure that readers everywhere will love how David and Emma’s story wraps up. But I personally feel like this was the best—and only—possible ending to David and Emma’s story.

I’d also be remiss if I didn’t draw attention to the warning in the description. Both Push and Pull have no lack of f-bombs as well as physical situations. I almost feel like Push had the more graphic scenes out of both books. So if Push didn’t bother your comfort level then you should be good to go on Pull as well.

I’m so glad that Claire Wallis, the Push series, and David & Emma have come into my life. Pull easily gets 4 Stars from me. I can’t wait to read more from Claire Wallis in the future. Have you read Pull? What did you think? Let me know!