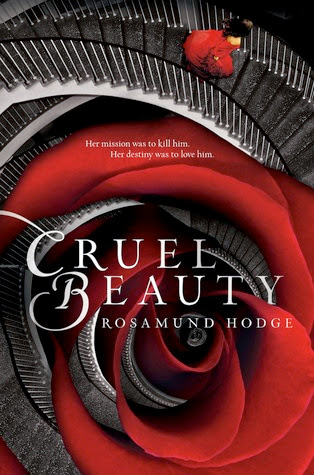 Goodreads description--Graceling meets Beauty and the Beast in this sweeping fantasy about one girl's journey to fulfill her destiny and the monster who gets in her way-by stealing her heart.

Based on the classic fairy tale Beauty and the Beast, Cruel Beauty is a dazzling love story about our deepest desires and their power to change our destiny.

Since birth, Nyx has been betrothed to the evil ruler of her kingdom-all because of a foolish bargain struck by her father. And since birth, she has been in training to kill him.

With no choice but to fulfill her duty, Nyx resents her family for never trying to save her and hates herself for wanting to escape her fate. Still, on her seventeenth birthday, Nyx abandons everything she's ever known to marry the all-powerful, immortal Ignifex. Her plan? Seduce him, destroy his enchanted castle, and break the nine-hundred-year-old curse he put on her people.

But Ignifex is not at all what Nyx expected. The strangely charming lord beguiles her, and his castle-a shifting maze of magical rooms-enthralls her.

As Nyx searches for a way to free her homeland by uncovering Ignifex's secrets, she finds herself unwillingly drawn to him. Even if she could bring herself to love her sworn enemy, how can she refuse her duty to kill him? With time running out, Nyx must decide what is more important: the future of her kingdom, or the man she was never supposed to love.

I’m not sure how much I’m going to have to say about Cruel Beauty. I got this as a free audio download this past summer from Sync. Can’t beat free, right? And I don’t know that I would have ever gotten around to this one had I not had it on audio. Anyway, so I was excited about it because it’s dubbed as a Beauty and the Beast retelling right? I can kind of see that. However, the description actually puts it as “Graceling meets Beauty and the Beast” and to that I have to say “WHERE? Did I read a different book?” Because there is nothing even remotely similar to Graceling about this book. (At least not Graceling by Kristin Cashore. Maybe they meant the other Graceling book that I haven't read.)

Because of the comparison to Beauty and the Beast, I was looking for different aspects of that story to come in to Cruel Beauty and so I was initially annoyed when we started heading down the path with Shade. That just didn’t seem to be in line with the events of what happens in Beauty and the Beast. However, eventually, that played itself out in a way that I was okay with.

Overall, I kind of feel like I don’t have much to add. Nyx goes through a period of time toward the end of the book where she’s forgotten most of what she experienced through the majority of the book. That section was slightly annoying. It seemed like an easy conflict choice, and one that was easily resolved as well. I wasn’t sure that there would be an ending that I would be okay with, but ultimately I was content with how everything went. I think it’s possible that I would have liked this one more or possibly less had I not been listening to the audio version. There was nothing wrong with the narrator, but I can see where in some places I would have burrowed deeper had I been reading instead of listening, yet in other places I can see that I might have gotten bogged down as well.

It was a pleasant story to experience, but I wasn’t blown away and I wasn’t frustrated too much. So all in all, I’m thinking a pretty average rating. Cruel Beauty gets 3.5 Stars for me. Have you read Cruel Beauty? What did you think? Let me know!