Twice in a Blue Moon - Review 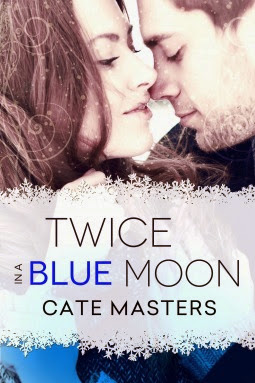 Twice in a Blue Moon

After the death of her first love, Melanie Michaels buries her grief in the risky demands of a reality show, where her extreme stunts leave her teetering on the edge danger. That’s exactly where she wants to be—until she arranges for her crew to traverse the Swedish Lapland in the dead of winter. It’s the one place she shouldn’t go, on the one day she should avoid—her would-be wedding anniversary.

Instead of romantic nights spent in the Ice Hotel or under the Northern Lights, Melanie is stuck with Joe “Buck” Wright, a snarky loner tour guide who loves his sled dogs and nothing and no one else. But Buck is also trying to numb a painful past. Can two people skilled at pushing others away find warmth at the edge of the Arctic?

Twice in a Blue Moon is a book that I wasn’t sure about when I requested it. It sounded interesting, but the cover could have used a little work and there were no real reviews on Goodreads when I requested it. So I took a chance. I was looking for something contemporary to review and didn’t have too many review books in that genre at the time. (Of course as these things go, I got approved for several contemporary books in a row right after requesting this one. Whoops! But seriously, can anyone have too much contemporary? Doubtful!) So by the time I picked it up, I wasn’t dying to read this book in particular, but I was hoping for a fun, quick contemporary read that I could finish and mark off my list.

Twice in a Blue Moon wasn’t a book that blew me away. It was fine enough for the mood I was in at the time, but there wasn’t much to really make it stand out among other books. Melanie was okay as a character. She’s been pushing herself into dangerous stunts ever since her fiancé died. This was so New Moon-esque. She does these stunts not because she has a death wish, but because in those moments she’s able to feel closer to Pete and even sometimes hear his voice. She goes to the very place where they would have spent their honeymoon on the third anniversary of what would have been their wedding in hopes of hearing/feeling Pete near her. But instead she feels even more alone than ever despite being surrounded by her reality TV crew.

Buck got his heart broken when an ex-girlfriend cheated on him. And so he’s determined to have zero personal relationships. Of course, he’s up for one night stands. What self-disrespecting-new-adult-male wouldn’t be? Ironically, Buck seems to instantly drop all of those “principles” the minute he meets Melanie. I found that hard to believe, but I didn’t really get annoyed by it.

There’s definitely an air of “fate” and insta-love/lust and all that jazz that I think some readers really dislike. Ultimately, I read Twice in a Blue Moon pretty quickly. I didn’t necessarily want to put it down, but I found myself not questioning things even when they didn’t make sense. This was an odd exerpience for me. It was almost like I didn’t even care when there were things that annoyed me. Twice in a Blue Moon was an okay read. It was in need of some polishing in a few areas that felt too “easy” and a bit unrealistic. But I wasn’t frustrated or huffing and puffing really. Twice in a Blue Moon gets 2.5 Stars. Have you read Twice in a Blue Moon? What did you think? Let me know!