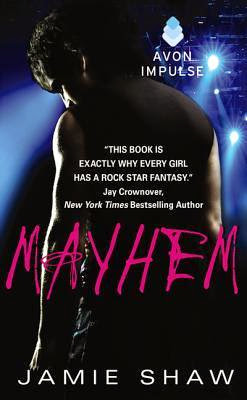 Goodreads description--When college freshman Rowan Michaels meets gorgeous, up-and-coming rock star Adam Everest, she knows a player like him is the last thing she needs after her ex-boyfriend shattered her heart. But she can't stop thinking about the kiss they shared on his tour bus.

On the first day of school, Rowan is stunned when Adam saunters into her French class. He's soon failing miserably, and, on a whim, she offers to tutor him. But Adam doesn't recognize her as a makeup-free, glasses-clad college student—a far cry from the beautiful, mysterious "Peach" he met at his concert.

During a wild weekend on tour with the band, Rowan can't help falling for the sweet guy buried beneath Adam's rocker persona. Yet she knows she could never compete with the girls constantly throwing themselves at his feet. She'd just end up hurt … again.

Peach is all Adam thinks about, though, and when Rowan realizes this, she has a decision to make: stay just friends to protect her fragile heart … or reveal the truth about the night they met and admit she's fallen completely, hopelessly in love with him.

Mayhem is another book that I took a risk on. There weren’t many Goodreads reviews when I requested it, but the description pulled me in. I was reading Red Rising more out of obligation than being in the mood for it, and I was feeling bogged down with all the description of the dystopian setting, so I wanted something that I could read quickly. Contemporaries usually fall into that category for me because I get sucked in and don’t come up for air until they are over. And that’s exactly what happened. Husband took a three hour nap one Sunday afternoon (he had a bad headache), and so I sat in the bed with him reading the whole time. Next thing I knew I was 60% finished with Mayhem.

Mayhem doesn’t feel entirely original to me. It reminds me of a combination of the Marked Men series by Jay Crownover and the Stage Dive series by Kylie Scott. But I guess more Stage Dive than Marked Men.

Rowan is in a long-term relationship with a guy who doesn’t deserve her. He breaks her heart and Adam from this rock band shows some concern for the girl crying outside of one of his shows on the curb. I never really quite understood why Rowan wanted to keep it a secret that she’s the girl Adam affectionately nicknamed Peach. Well I can understand her keeping it from Dee (at first), but only because Dee seems a bit over-the-top and Rowan doesn’t seem the type to like a big deal being made out of anything. I can definitely understand Rowan’s resistance to letting her guard down with Adam though. He shows very little indication that he wants anything more from her than a physical relationship, so she works hard to keep their relationship in the friend-zone.

Adam is easily likeable. He has a laidback vibe to everything he does. You can tell that he obviously treats Rowan differently than any of the other females he’s around, but I wish he were a little more obvious about his intentions. However, that makes sense since Adam doesn’t even understand his own intentions. I had been hoping to have a dual narrative, but Adam only has one narration—the epilogue.

The side characters were all fun even if some were a bit cliché. Dee should be interesting to read about as she’s more of a partier, she’s more casual in her relationships, and she has some baggage with her mom that Rowan conveniently set up in Mayhem. (The next book, Riot, is supposed to be about her.) I started to say that Shawn is probably the other character that I’m most interested in getting a story about. While I definitely want his story, I remembered Mike about halfway through typing that statement. Mike isn’t like the other guys. He doesn’t seem to care one lick about the groupies that follow the band around and that I respect.

Obviously, there are some sexual situations and there is language. Just throwing that out there as always.

-“Say something to me in French.” “Adam thinks about it for a moment, and then with a big smile, he looks up at her and says, “Tu parles trop.”” [translation- “You talk too much.”]

-I thought I had loved Brady, but that was the love of a girl who barely knew herself.

Mayhem was a pleasant surprise. It sucked me in. Despite not being an entirely original concept for my reading life, I enjoyed almost every minute of it. There were a few small things that made me roll my eyes, but nothing that had me too frustrated. More than anything, I was trying to keep the smile off my face so that I didn’t look like a lunatic. I told Husband that Mayhem was cheesy….BUT the GOOD kind of cheesy—as in, I can’t stop smiling cheesy. Mayhem gets 4 Stars from me. Have you read Mayhem? What did you think? Let me know!