Monday: Review of Even in Paradise by Chelsey Philpot
Tuesday: Top Ten Tuesday
Wednesday: Waiting on Wednesday
Thursday: Review of The Boys of Summer (Summer, # 1) by CJ Duggan
Friday: Review of Cruel Beauty by Rosamund Hodge
Saturday: Discussions Only We Know: Books on the Cheap 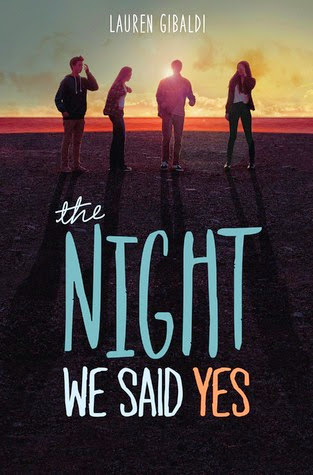 The Night We Said Yes

Before Matt, Ella had a plan. Get over a no-good ex-boyfriend. Graduate from high school without any more distractions. Move away from Orlando, Florida, where she’s lived her entire life.

And neither was attending a party that was crashed by the cops just minutes after they arrived. Or spending an entire night saying “yes” to every crazy, fun thing they could think of.

Then Matt abruptly left town, and he broke not only Ella’s heart but those of their best friends, too. So when he shows up a year later with a plan of his own—to relive the night that brought them together—Ella isn’t sure whether Matt’s worth a second chance. Or if re-creating the past can help them create a different future.

In alternating then and now chapters, debut author Lauren Gibaldi crafts a charming, romantic story of first loves, lifelong friendships, uncovered secrets, and, ultimately, finding out how to be brave.