The Boys of Summer - Review 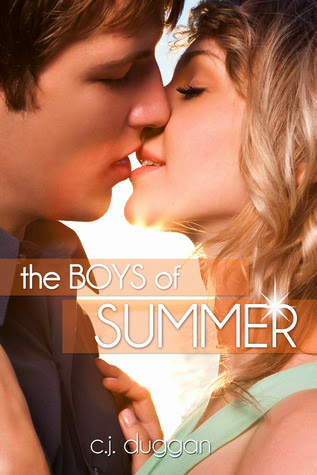 Goodreads description--It seemed only natural to nickname them the ‘Onslow Boys’. Every time they swaggered in the front door of the Onslow Hotel after a hard week’s work, their laughter was loud and genuine as they settled onto their bar stools. I peeked through the restaurant partition, a flimsy divider between my world and theirs. I couldn’t help but smile whenever I saw them, saw him... Toby Morrison.

Quiet seventeen-year-old Tess doesn’t relish the thought of a summertime job. She wants nothing more than to forget the past haunts of high school and have fun with her best friends before the dreaded Year Twelve begins.

To Tess, summer is when everything happens: riding bikes down to the lake, watching the fireworks at the Onslow Show and water bomb fights at the sweltering Sunday markets.

How did she let her friends talk her into working?

After first-shift disasters, rude, wealthy tourists and a taunting ex-boyfriend, Tess is convinced nothing good can come of working her summer away. However, Tess finds unlikely allies in a group of locals dubbed ‘The Onslow Boys’, who are old enough to drive cars, drink beer and not worry about curfews. Tess’s summer of working expands her world with a series of first times with new friends, forbidden love and heartbreaking chaos.

All with the one boy she has never been able to forget.

It will be a summer she will always remember.

The Boys of Summer wasn’t really what I was expecting it to be. There are some sexual experiences and occasional coarse language like the warning in the description suggests, but the situations weren’t really descriptive, and the language while present, wasn’t as bad as some books out there with similar warnings. I definitely expected The Boys of Summer to be more of a new adult book, but even though I’m not sure what age group I would suggest this book too, it felt younger than most new adult books. But all of that honestly was refreshing rather than a disappointment.

The Boys of Summer is about Tessa and her friend, Ellie who happen to get summer jobs working at a local hotel. They both work as waitresses and occasionally dishwashing. And through these summer jobs, Tessa and Ellie befriend a popular group of older boys that they’ve nicknamed the Onslow Boys. Tessa has had a crush on Toby Morrison since 7th grade and has almost obsessively watched him throughout the years. And Ellie, well Ellie is mostly just boy crazy. She seems to flit from one boy to the next without caring much about her reputation. Tessa and Ellie are also best friends with Adam, but Adam spends most of his summer in a different location and isn’t as present. He was a likeable character even if it seemed a bit odd for him to be a part of their threesome. I wondered if he had feelings that went deeper than friendship at points, and I’m still interested to see what might happen with Adam.

The Onslow Boys are about 5 years older than Tessa and Ellie. Five years isn’t entirely too much, but there can be a big gap between 17 years old and 22 years old. For one, these guys were drinking ALL THE TIME. It didn’t matter what time of day. They all had a beer in hand at all times. It was a bit much. Tessa started off the book feeling very young to me. She does grow and come into her own throughout the book, but it emphasized the differences in their ages for a while.

One of my favorite parts of The Boys of Summer was how confused Tessa was when it came to Toby (and just boys in general). She has a hard time reading Toby. Is he interested? Is he not? Does he like her? Does he not? Is he flirting with her? Is he mad at her? I mean aside from the fact that Toby actually has a girlfriend. Does he like Tessa? Or is he happy in his current relationship? She just has no clue. And as the reader, I wasn’t sure either. His actions as Tessa perceives them were definitely confusing. And I appreciated CJ Duggan’s choices there. She chose not to reveal to the reader more information than Tessa herself had and that kept me authentically just as unsure as Tessa felt. I really connected with this because that’s how I felt in high school. I felt all over the place. How do you know if a guy is genuinely interested in you or if he just likes to flirt? It’s not always easy to differentiate.

I wasn’t sure how CJ Duggan was going to wrap everything up in a way that felt authentic and that I would be satisfied with, but she pulled it off.

I loved all of the characters (main and secondary) and can’t wait to delve into the others deeper when I continue the series which I can’t wait to do. Sean and Adam were particularly enjoyable aside from Tessa. Tessa, Adam, and Sean were all characters that made me laugh at different points. I’d quote them, but the sections I highlighted were kind of lengthy.

I will say that it was obvious to me that this was not an American author or setting. I enjoyed the difference in the way the characters talk, but sometimes I was like “what in the world is she talking about?” And it made me realize how much I take for granted being from the United States. And that made me think about this post Lola @ Lola Reviews did about some frustrations she has and struggles with reading American literature. It’s something I’ve never really thought about before, and I haven’t read enough non-US authors in order to think about this more. On top of that, Nomi @ Nomi's Paranormal Palace told me that this was an authentic depiction of Australian life. She specifically said that this series was very similar to her own experience growing up in Australia.