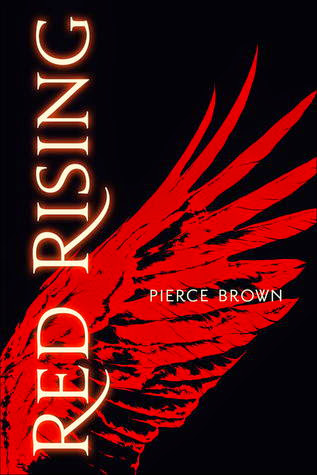 Goodreads description--The Earth is dying. Darrow is a Red, a miner in the interior of Mars. His mission is to extract enough precious elements to one day tame the surface of the planet and allow humans to live on it. The Reds are humanity's last hope.

Or so it appears, until the day Darrow discovers it's all a lie. That Mars has been habitable - and inhabited - for generations, by a class of people calling themselves the Golds. A class of people who look down on Darrow and his fellows as slave labour, to be exploited and worked to death without a second thought.

Until the day that Darrow, with the help of a mysterious group of rebels, disguises himself as a Gold and infiltrates their command school, intent on taking down his oppressors from the inside. But the command school is a battlefield - and Darrow isn't the only student with an agenda.

Oh boy. I have no clue where to start talking about this book. Prior to picking up Red Rising I noticed that it was getting some particularly high ratings on Goodreads. As of the of typing this review the average rating for Red Rising on Goodreads is 4.17 which is pretty awesome. Specifically, I saw that Kimba gave it 5 Stars, and since it was a freebie on Amazon (at the time), I knew I had to check it out.

The description above is both 100% legit and yet gives you absolutely no indication of what this book is actually about. Yes, Darrow is a Red and a miner. Yes the Golds have lied to the lowReds about Mars being currently uninhabitable. But man…that’s just the tip of the iceberg. That’s just the background information. I will say that Red Rising had an extremely slow start to me. I mark my book progress in increments of 10% (for ebooks), and I really felt like it took a long time to make it from 0 to 10% and from 10 to 20 and even from 20 to 30%. I found myself interested in what was happening, but at this point in the story, Red Rising was easy for me to put down. As a matter of fact, I think I read roughly 3 – 5 books in between the time I started Red Rising and the time that I finished it. Even when I was fully invested, Red Rising still had parts that would fall into lulls periodically.

As the description says, Darrow starts out as a miner, events take place that serve as a catalyst for Darrow. He wasn’t exactly content where he was, but he needed a little bit of an extra push to join the rebellion that the description mentions. Darrow doesn’t just disguise himself as a Gold, the rebellion transforms his entire body into BEING a Gold. His bones are broken and rebuilt. His muscles. His hair color. He receives eye transplants. And the physical transformations abound. But Darrow has to spend time being prepared mentally as well. His goal is to secure a position in a highGold’s household or an apprenticeship. And he’s going to do so by going to this Institution that is basically a school for Golds to determine which ones come out on top—separating the best from the almost best.

That all sounds well and good right? It’s like Hogwarts! YAY!....PSYCH! Not at all. Unless someone mixed Hogwarts and The Hunger Games and called it school. There’s no magic in this world, but there is some technology that we don’t have either, so Red Rising does require a good bit of imagination. But here’s where the book really took off. All the students have to come out on the other side of the Passage. And after that, they’re basically thrown into a real-life game of Risk

. There are twelve houses at the school, and the object is to conquer and win. The goal isn’t to kill all the other students, but death and injury are certainly part of the game. Strategy is key, and power is a must. Until there is one winner. That winner is the leader, or Primus, of the winning house, and thus offered the best positions upon finishing the Institute. Darrow must win. He must.

The most exciting things I want to talk about in regards to Red Rising are all spoilers. Don’t you hate when that happens? I certainly do. I want to talk about what I saw coming and what completely surprised me. I want to discuss all of those things, but I just can’t ruin this book for you. The writing didn’t quite blow me away with its beauty or anything like that. Yet, I found myself highlighting frequently and often rather large sections at a time. And now when I’ve gone back to find my favorite quotes, I see nothing but beauty in the sentences.

-I would have lived in peace. But my enemies brought me war.

-I was forged in the bowels of this hard world. Sharpened by hate. Strengthened by love.

-“…All ears yearn for a voice to lead them through darkness.”

-…I still feel his eyes watching me as though I am something different, something strange. It’s like they suddenly don’t understand what it is they have created. I touch the haemanthus blossom in my pocket and feel the wedding band around my neck. They didn’t create me. She did.

-I’m a sheep wearing wolves’ clothing in a pack of wolves.

-I am the spark that will set the worlds afire. I am the hammer that cracks the chains.

-Words are a weapon stronger than he knows. And songs are even greater. The words wake the mind. The melody wakes the heart.

I can’t quite give Red Rising 5 Stars because it took a while for me to get hooked and even when I did there were moments that lulled. But since finishing Red Rising, I can’t seem to quit thinking about this book. And the more I think about it, the deeper it becomes and the more I realize how great it really was. I’m torn between needing to rest from the massiveness that was this book and wanting to jump right into book 2, Golden Son which I already have in my possession. Red Rising easily gets 4.5 Stars. Have you read Red Rising? What did you think?

Side note: They really need to turn this book into a TV series/movie! I think this would translate to a visual medium just perfectly. And they wouldn’t even have to change it to interest men and women both.