Out of Breath - Review 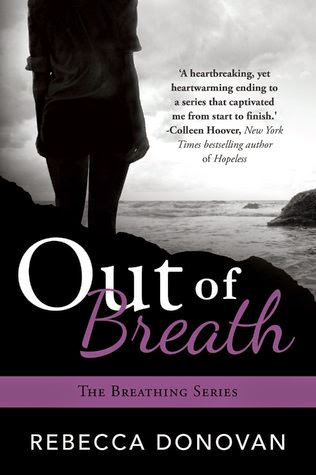 Goodreads description--Emma leaves Weslyn and everyone in it behind to attend Stanford University, just as she always intended. A shell of her former self, she is not the same girl. She is broken, and the only way that she’ll be whole again is through forgiveness. Emma must find a way to forgive herself and recognize her own worth before she can receive the love she deserves. This final installment will have readers holding their breath until the very last page.

Reason to Breathe was the first book I rated 5 Stars in 2014. I fell in love with the characters, and I was rooting for Emma who was up against all kinds of odds. Barely Breathing followed and was one of the most emotionally exhausting and frustrating books I’ve ever read. Rebecca Donovan even said on Facebook that Emma makes all the wrong decisions in that book, and that is 100% an accurate statement. I was so drained after reading that book. I knew I wanted to know how it would all end, but boy did I need some time and space before I could read Out of Breath. I went from loving Rebecca Donovan with Reason to Breathe to just not being entirely sure what she was going to put these characters through next. My sister read Out of Breath before I did. She said it ended well but the beginning was a little rough. That wasn’t exactly what I needed to hear for me to be racing out to pick it up. When my friend Lacy breezed through all three books recently I knew it was finally time for me to finish this series. Lacy told me that book 3 was much better than book 2. And thank goodness for that.

Ultimately, I agree with both Melissa and Lacy. There was a bit in the beginning of Out of Breath where I wanted to smack Emma in the head to knock some sense into her. But I was dreading this book so much more than was necessary. Like Lacy said, it was so much better and satisfying than Barely Breathing. Don’t get me wrong, Rebecca Donovan still puts these characters through a lot. Of course there are still things for them to overcome, and because of things that happened in Barely Breathing they have a lot to forgive in order to move forward.

Emma was still a struggle for me though not nearly at the Barely Breathing level. She went from trying so hard in Reason to Breathe to making all the wrong choices in Barely Breathing to not being sure of anything in Out of Breath. And seriously, who could blame her after all she’s been through? Emma struggles with the “for your own good” sacrifices self-sabotage that I get so annoyed with, but thankfully she gets over this eventually. Although how Emma could possibly even touch alcohol considering her mother is an alcoholic and everything Emma went through because of that is beyond me. This being used as a coping mechanism for Emma in Out of Breath was hard for me to read.

I loved how much talking and discussion had to be done in order for these characters to move forward. They can’t sweep things under the rug and pretend like the past didn’t happen. They have to talk about what went wrong and find a way to forgive each other (and themselves) in order to move forward. But I do wish there was more information or clarification about whether Emma ever ended up going to counseling/therapy. It was suggested, but she never really committed to it as far as we know.

I loved Evan just as much in this book as ever. Loved Sara and Jared. And I even really enjoyed Emma’s roommates (minus Peyton). I liked that Peyton wasn’t as present in the last bit of the book, but I do wish there was some kind of explanation for why she wasn’t present. I can assume and guess, but that’s all I’ve got. Cole I wasn’t sold on, but that’s because he just wasn’t Evan. TJ, Nate, Brent…loved and wouldn’t mind getting more of each of their stories.

-“I listen to silence. And you”—his mouth pulled into a smirk—“you have a lot to say. Although I haven’t quite figured out what it is yet.”

-“What happened to her, Sara?” Sara looked across at me with sorrow-filled eyes. “She left you.”

-I slid my hand down to rest on his chest and I could feel his heart beating faster. That’s when I realized that mine wasn’t.

-“Living in the mistakes of your past isn’t going to do anything but destroy your future.”

All in all, I think Out of Breath was much better than I was expecting. It was probably one of those times where going into it with low expectations really served to help me enjoy it more. I was prepared to be annoyed and frustrated beyond reason, and I was very thankful to find this wasn’t the case—even though there were moments of frustration. Out of Breath gets 4 stars for me. Have you read Out of Breath? What did you think? Let me know!