Even in Paradise - Review 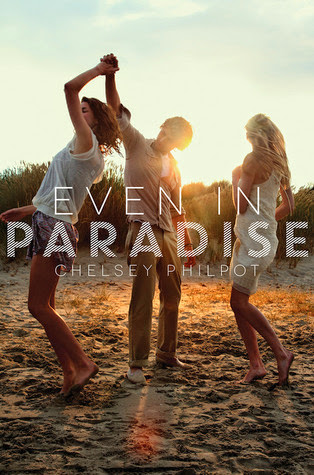 Goodreads description--When Julia Buchanan enrolls at St. Anne’s at the beginning of junior year, Charlotte Ryder already knows all about the former senator’s daughter. Most people do... or think they do.

But behind her self-assured smiles and toasts to the future, Charlotte soon realizes that Julia is still suffering from a tragedy. A tragedy that the Buchanan family has kept hidden … until now.

I’m not quite sure what I expected Even in Paradise to be, but what it turned out to be wasn’t what I was expecting. This was one of those books that I requested and downloaded way ahead of the release day, but the more time went by, the more I wondered if it wasn’t going to be very good. Honestly, I had no reason to worry about that. I hadn’t seen any reviews or even any ratings. As a matter of fact, I hadn’t really seen anyone talking about Even in Paradise at all really. And maybe that was it…that no one was really talking about it at all that had me worried.

When I first picked up Even in Paradise to read the release date had already passed, and I felt guilty for not having reviewed it already. So I picked it up with fairly low expectations. About 10% in, I was feeling like there was too much description and not enough action/dialogue. That righted itself as I kept pressing through, but the ratio of description to action/dialogue was still more heavily skewed toward description for my tastes.

Honestly, I’ve not thoroughly decided just what I think or just how I feel about this book. While I was interested in knowing more about what was going to happen, what had happened, etc, I had some irritations as well. Let’s start with Charlotte. Charlotte basically drops all of her current friends when new and exciting Julia shows her any attention. She’s aware that it’s happening and yet she can’t bring herself to care enough to stop it. I can understand how this happens, but that doesn’t mean it left me feeling all warm and fuzzy over her relationship with Julia. Julia talks about how Charlotte just “gets it,” but that was somewhat confusing as I got the impression that Julia would have been just as content no matter who was by her side. Julia led the friendship for sure. And so I see Julia as behaving exactly the same no matter who her friend was. And Julia, as a character, despite knowing she’s been through so much and feels so much pain, I don’t see her as someone I could have really been friends with and so that was somewhat of a struggle for me to connect with.

I liked Sebastain. I loved that while he was described as handsome and charming, he wasn’t perfect. He was clumsy. And I wanted more from him. When things got difficult towards the end, he just wasn’t really there for Charlotte like I hoped he would be. Truthfully, I guess that’s how I felt about all the other Buchannons. Boom, Teresa, Bradley, Cordelia and even Sophie. They’re so quirky and unique. I liked them from the outside looking in, but none of them were really anyone I could see myself getting too attached to in real life (except maybe Cordelia). I kept waiting for them to look down on Charlotte or be disapproving, but they never really were. It’s hard to explain. But like Sebastian, none of them were really there for Charlotte. It was a one-way relationship.

There’s a big mystery surrounding the tragedy alluded to in the description. I feel like Chelsey Philpot didn’t exactly handle this mystery the right way. What ended up being the big “surprise” wasn’t a surprise at all. It was something that I think anyone would at least wonder about even from reading the book description. And then the fact that Charlotte was so oblivious just made it more frustrating. It takes so long for the mystery to be revealed that I feel as if any reader will be more annoyed with the mystery than intrigued.

-"You were the one who asked me what I thought. Don't get mad just because you don't like the answer."

-"I never understood how you could 'lose' a religion...where does it go? It's not like a watch or a set of keys...something that can disappear in a purse..."

-It's only in hindsight that we can point, as easily as finding a town on a map, to the moments that shaped us--the moments when choices between yeses and nos determined the people we became.

-This is not something anyone can teach you. Heartbreak you must learn on your own.